You can download the solution to the following question for free. For further assistance in Economics assignments please check our offerings in Accounting assignment solutions. Our subject-matter experts provide online assignment help to Accounting students from across the world and deliver plagiarism free solution with free Grammarly report with every solution.

1. Choose a topic from Micro economics that matters to you and find a recent news article covering that topic.
Topic: Fuel Prices

2. Evaluate the article using Economic concepts. You should include

3. You may provide graphs/charts/diagrams where necessary to enhance your presentation style.

4. You need to attach a copy of the article with your assessment.

Oil is an important commodity in the global economy. The fall in oil prices should either result in the fall in oil production or should lead to an increase in the growth of the global economy. After the sanction on Iran was lifted, it was expected that the total oil supply in the world economy would increase and hence leading to a fall in oil prices (Price, Kevin, 2012). But this didn't happen. Even though the price of oil fell, it didn't spur economic growth. It is important as well as interesting to observe the factors that impact oil prices as well as the impact of change in oil prices on the world economy and consumption.

According to the law of supply, with other factors remaining constant, the rise in price tends to higher supply. But as seen in the below graph, even though the oil prices have fallen over the years, but the oil supply has continued to increase. This leads to oversupply. Oversupply means that the supply is greater than the demand. 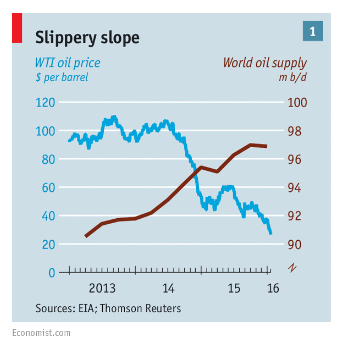 Figure 1: Variation of oil price with a change in oil supply (Source: Economist)

A decade back, the world economy was facing a shortage of oil, thus pushing oil prices to $140 a barrel, but currently, there is an excess of oil. A year bank, total global production of oil was 96.3m b/s of oil, but the consumption of oil was only 94.5m b/s. Thus, on a daily basis, 1.8m/barrel of oil was stored in tanks meant for storage. The economic influence of oversupply is another mystery (Dizard, John, 2015). Lower price fuel should encourage economic growth of the world. Industries that implement oil as the main resource is highly profitable. The advantage of consuming countries is that they exceed the expenses of produced goods. But, in 2016, around 28% decreases in prices of oil had corresponded with the crisis in global markets of share (Pearce, Andrew, 2015). It is just like as if markets are protesting long-held conditions related to financial benefits of less price of energy or contending that economic growth of the world is so dynamic that an excess of oil will help to do this.  Iran is one of the most sudden influences of bearishness (Firzli, Nicolas, 2014).  The below figure shows the cost of oil production for different countries. It can be seen that the cost of production is lowest for Iran.

Australia Suffering From Potato Shortage After Wet And Cold Weather