The following information has been extracted from the full New product business plan and is intended as a preliminary briefing for STAR Industries senior and middle management. Detailed analysis and justifications can be found in the full business plan.

STAR Industries is aiming to extend its reputation as Australia’s premiere manufacturer of quality doors and windows by expanding its range of products.

It is proposed that STAR Industries commence manufacture, distribution and retail of fixed and retractable aluminium awnings. These can be efficiently manufactured by a significant utilisation of existing infrastructure and with modest additional capital investment.

This expansion would be in three phases:

The initial research indicates that there may be an opportunity to extend STAR Industries’ operation to South-East Asia, where residential and commercial construction is growing. The opportunity is greatest in the awnings area, where local companies target the budget end of the market. STAR’s quality range of products can aim at the higher end of the market and will compete successfully against other imported ranges from the USA and Europe.

The existing business of STAR Industries is the manufacture, wholesale and retail of quality windows and doors for residential and commercial premises. The company has been successfully competing in the higher-quality, higher-price market. Competition generally comes from either well-established national companies who produce quality product only as an add-on to a broader economy product range or from higher-priced overseas manufacturers of quality products.

The proposed additional industry area is the manufacture, wholesale and retail of a range of awnings in both the commercial and residential markets. These would again be positioned as higher-quality, higher-priced products.

An emphasis on modern architectural design, the use of powder-coated aluminium and a select range of Sunscreen fabrics will establish the product as a desirable designer addition for the style-conscious.

Production will initially involve five awning styles, each able to be customised for length, depth, colour and fabric.

The awnings will be constructed with forged aluminium components. Forging the aluminium components is stronger than traditional die-casting or permanent mould castings used by competitors and will allow STAR to utilise existing technologies and processes. The frames will also be powder-coated in any of five standard colours, using existing processes. This, along with a range of fabric options, will result in a high-quality design product for fashion-conscious renovators and architects.

STAR is in a strong financial position coming off the back of three years of the highest levels of building activity seen in Australia and after having undergone a minor restructure of it’s production processes. The final figures for the last financial year are reproduced below (from STAR Annual Report). 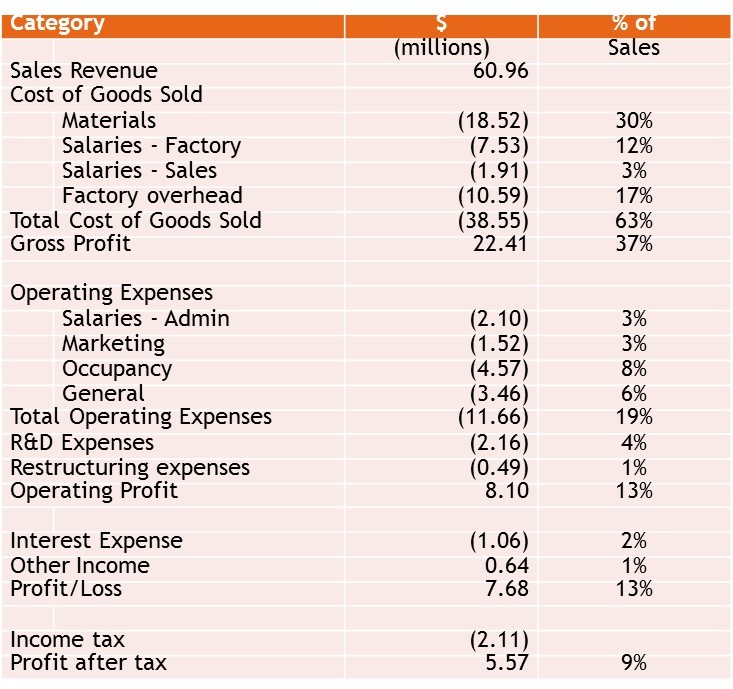 Start-up summaryThe proposed new product range will require significant set-up effort. While many of the manufacturing processes involved capitalise on existing in-house facilities such as powder coating, there will be a substantial requirement for tooling and machinery. In line with this, new staff are required in manufacturing and it is also proposed that a dedicated Product Manager for this product range be appointed in the Marketing division solely to this range of products. 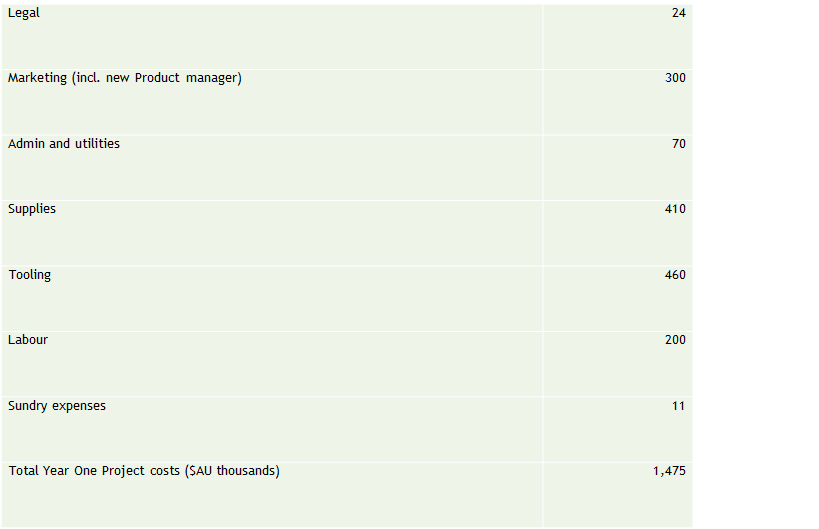 Since much of the future predicted growth of STAR Industries relies on the success of this project, a portion of STAR’s consolidated earnings from the past two years will be allocated directly to funding the first year of start-up and production. The project will be expected to break even at eighteen months and profits from that point will underwrite planning for the expansion into South-East Asia.

As stated above, the project is expected to reach break-even point at eighteen months. This is reflected in the projected income statements above for Year Two. Initial estimates for sales are:

Achieving these figures will be crucial to plans for expansion into SE Asia in Year Three.

The new range of awnings will reinforce the STAR commitment to the creation of quality design. While all five styles would be priced higher than most existing competitive products, the price would be less than those of importer Euroawnings, which currently dominates the high-quality end of the awning market.

This market advantage is assisted by import tariffs on products from the USA and Europe. Our research indicates that import tariff levels are set to remain static for the next five years.

Market positioning will be crucial to the success of the new range of awnings. Pricing for the new products will be in keeping with the use of higher-quality materials and workmanship.

The new range of awnings will be ‘flagship’ products for STAR. Awareness of STAR as a quality brand will be significantly increased as a result of the advertising exposure of the new awnings.

While designed to be promoted alongside our existing products and also designed to take advantage of STAR’s current marketing strategies and promotional avenues, the new awnings call for more direct appeal to public tastes. This is in addition to STAR’s current promotional strategies which target architects and builders through wholesale outlets, trade press and special interest publications.

Increased public awareness for these new products and for STAR will flow from two main additional marketing efforts:

The following represents the broad strategy to be adopted in the introduction of STAR’s new product range. Progress of Years Two and Three are conditional on the success of previous stages.

The major project milestones in Year One are anticipated to be as follows:

This project represents a major new initiative for STAR Industries and is in many ways a new line of business.

The existing management structure at STAR will be appropriate for overseeing the first part of this new project. This is due to the utilisation of existing resources with minimal new production and distribution infrastructure being required.

There will be some investment in new personnel — two part-time production workers, one new Production Supervisor and one dedicated Product Manager.

At eighteen months a review is scheduled which will address any changes or additions that may be necessary. This review will focus particularly on additional resources needed for the launch into Singapore and Bangkok.

The production of a new range of window awnings by STAR Industries represents a significant addition to our line of business. In many ways the fortunes of this project will dictate STAR’s own success over the next few years. What follows is a brief assessment of the internal and external forces affecting the success of this project.

This Executive Summary for the STAR Industries new window awnings product launch has shown that there is great opportunity for growth in the coming years. Along the way there are many challenges to face and the whole process will need to be closely supervised and realistically resourced.

The future of STAR Industries rests largely on the success of this project. Successful achievement of the goals set out above will mean that STAR has the opportunity to become a dominant force in the South-East Asian marketplace.

This assessment is broken up into four parts. Each part must be completed and submitted as evidence of competence.