Our Finance subject matter experts have worked on this assignment already in the recent past. You can buy a fresh copy of the solution for this assignment case study. Please fill in your assignment details in the Order Now form or Live Chat with our expert now.

Freedom Plc is currently finalizing their financial statements for the year ended 30 September 2016. Freedom is a manufacturer and online retailer of electronics cabling equipment.

During the last few months the Company has experienced a decline in sales and the share price has fallen by 20%. In addition, just before the year end one of the Freedom’s delivery vans was involved in a serious accident which has led to negative publicity for the Company and may cause the Company’s substantial loss (see further details below).

The Financial Director of the Company wants to present the financial results for the year ended 30 September 2016 as favorably as possible as he is concerned that the share price may fall further.

The draft trial balance for the year ended 30 September 2016 is presented below: 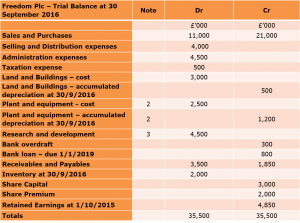 You are a Freedom’s External Financial Advisor and the Financial Director has asked you to consider the three issues below and comment on the accounting treatment adopted.

On 1 October 2015 a delivery van returning to the Freedom’s manufacturing plant went off the road and crashed into some trees in a wooded area. The van caught fire on impact and the fire spread to the surrounding trees. The driver escaped unharmed and is completely exonerated from blame.

There is no law that requires Freedom to clear up the site and replace the damaged trees. However, the company has published an environmental policy, approved by the directors, that states: “Freedom plc will accept responsibility for environmental damage attributable to the company and will spare no cost to rectify the damage.”

The present value of £1 payable at the end of a period discounted at 10% is as follows:

The Financial Director of Freedom has not accounted for this transaction within the trial balance above as the clearance work will not commence until after the year end and there is no legal requirement to carry out the work.

Freedom owns and operates an item of manufacturing plant that cost £650,000 and had accumulated depreciation of £250,000 on 1 October 2015. It is depreciated at 15% per annum on cost. On 1 April 2016 the plant started malfunctioning due to a damaged part. Due to the unavailability of replacement parts, it is not possible to repair the plant, but it still operates, albeit at a reduced capacity.

It is expected as a result of the damaged part, the remaining life of the plant from 1 April 2016 will be only two years. Because of its reduced capacity, the estimated ‘value in use’ of the plant is £150,000.

The plant has a current disposal value of £20,000 (which will be nil in two years’ time), but Freedom has been offered a trade-in value of £180,000 against a replacement machine which has a cost of £1 million. Freedom is extremely reluctant to replace the plant as it is worried about the long term demand for the product produced by the plant. The trade-in value is only available if the plant is replaced.

For the year ended 30 September 2016 the Financial Director has charged a full year’s depreciation at the rate of 15% per annum on cost because no decision has yet been made about what to do with the plant.

The company is developing new cabling equipment which has superior ‘high speed’ processing capabilities. At 1 October 2015 £2 million had been incurred on the project, which has been charged as a research expense in the Statement of Profit or Loss in the year ended 30 September 2015.

Due to the predicted success of the new cabling equipment the Financial Director has treated all costs incurred on the project as an ‘intangible asset’ at 30 September 2016. Consequently, the £4.5 million intangible asset includes the £2 million costs previously charged as a research expense in the year ended 30 September 2015.

Questions based on the above Case Study

As the External Financial Advisor to Freedom Plc prepare a report to the Financial Director on the appropriateness of the accounting treatment of all the 3 issues noted above. This report should not be more than 1000 words and should include the following;

c) Restate the Trial Balance at 30 September 2016 to reflect the correct accounting treatment determined in part (b) using the proforma attached.

d) Using the restated trial balance in (c) prepare a Statement of Profit or Loss and Statement of Financial Position using the format as prescribed in IAS 1.